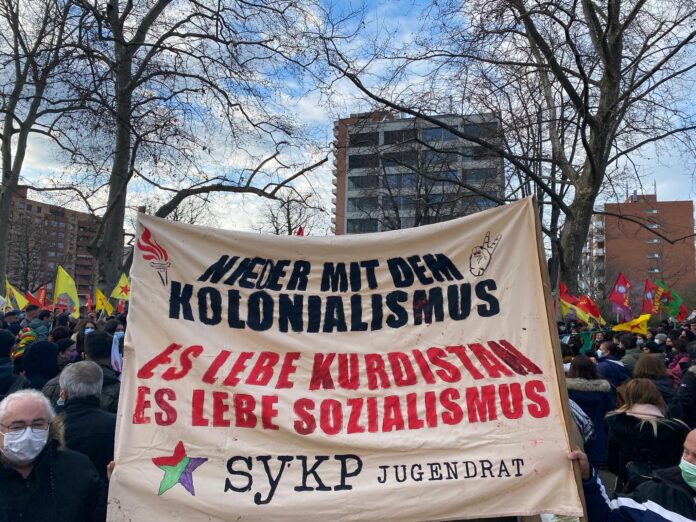 While we try to simply keep our homes warm and our stoves burning, bombs are exploding across Turkey and the broader region. First, a bomb in Taksim, next Turkish bombardments of Syrian towns, and then Iraqi towns all along the border.

At its founding 100 years ago, the Republic of Turkey was not — for many reasons — a guiltless, blank slate. Now is not the time to debate these details. History is history. But insisting on the same mistakes, even after 100 years, means continuing down a path towards more war and more bombs.

The Kurdish people are under attack. The Republic has insisted on denying the existence of the Kurdish people and their homeland. Bombardments, prisons, prohibitions, and exiles did not extinguish the Kurds or the Kurdish question. This century-old method of ethnic war is futile.

For millennia, Anatolia and Mesopotamia have been the cradle of ancient civilizations where many ethnicities and religions have co-existed. For 100 years, however, Turkish state policy set about reducing this cultural diversity to a monolith. This approach explains many of our current problems. Simply put, the state missed its chance to establish a Republic based on inclusion and equality for Armenians, Kurds, Turks, Arabs, Circassians, and others.

However, this is not the moment to dwell on the past. We must do something now, as missiles rain down on Kurds, our fellow citizens and friends, and other peoples living near the border regions. Our urgent task is to stop this violence immediately.

At the dawn of the second century of the Republic, the chance to achieve a truly democratic Republic is threatened by its own bombs and missiles.

Like the periods before the First and the Second World Wars, the great powers have an eye on our region. And not only on the region. A climate of war pervades the whole world.

Of course, imperialist states and corporations do not care about the welfare and happiness of our region’s working people. Nor do they care about democracy. The only thing that matters to them is the extraction of natural resources and labour from our lands.

If we want a democratic republic, no help will come from any imperialist power – not from the US or the European Union. It is up to us and our own determination: will we allow the perpetuation of the 40-year war and 100-year ethnonationalism that forces us to endure only more conflict, racism and discrimination?

Missiles fired under the pretext of combating supposed terrorism will benefit no working-class person. The looming war promises nothing besides fuel for the Erdoğan/AKP-MHP’s bloc election campaign.

The policies of militarism and hate from both the ruling so-called People’s Alliance and the opposition Nation Alliance will not bring happiness, welfare, or justice to any part of society. They will create no jobs and or higher, fairer wages.

However, there is another alliance: the Labour and Freedom Alliance, including the HDP (Peoples’ Democratic Party) and our Socialist Refoundation Party (SYKP). The sole aim of our alliance is to establish a democratic and social republic, where working people and all those who strive for self-determination of their people, their identity, and their own bodies will live in freedom and equality. And we affirm that we can achieve this goal. But first, we must stop all those who impose upon us this system of permanent war, exploitation, and discrimination.

If we remain idle during today’s militarist escalation, bombs will fall on our homes tomorrow. While Kurdish homes are bombed, Turkish homes cannot prosper. While war ravages Kurdish cities, there can be no peace in İstanbul. It is impossible to have democracy in Turkey while it imposes fascism on Kurdistan.

We will not allow the perpetuation of this racist and sexist system of war, hatred, and exploitation. The SYKP, as one of the HDP and the Labour and Freedom Alliance’s constituent parties, will never waver in the construction of a truly social and democratic republic.