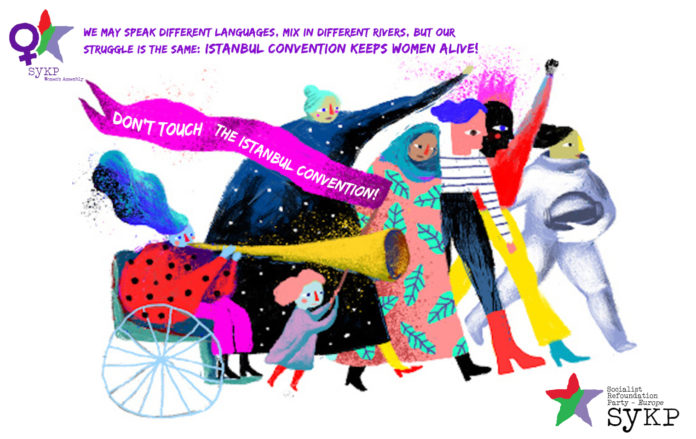 Signed by 45 member countries of the Council of Europe and the European Union, the treaty corresponds to the Family Protection Law No. 6284 on the Prevention of Violence Against Women in Turkish law.

This convention, which has been in force for six years, is an achievement of the women’s movements and feminist struggle around the world.

The Istanbul Convention is the first convention in international law saying that male violence targeting women is a result of gender inequality and gender discrimination. It is based on “four Ps”: Prevention, Protection and support of victims, Prosecution of offenders and Integrated Policies.

These four basics foresee a series of specific measures for combatting and preventing physical, sexual, economic and emotional violence against women.

At the same time, the treaty has great importance for the lives of women, as it is the first binding convention that has an independent monitoring mechanism in combating violence against women and has the power of punishment.

However, despite Turkey signed in the treaty and the law No. 6284, each year, more women lose their lives due to the authorities’ failure to fulfil the obligations of the Istanbul Convention. Besides, Turkey’s ruling Justice and Development Party (AKP) government, the pro-government Islamist groups and the close political circle of Turkish President Erdoğan want to withdraw from the convention. They argue that the treaty is not suitable for the Turkish family values, claiming that it risks destroying the unity of the family, female and male identities due to its approach to gender and encourages homosexuality.

These are sexist, homophobic and irrational arguments of Turkey’s ruling ideology. While we are asking for the full implementation of the law, preventive measures against violence against women in a period where their lives are so threatened, we face discussions and plans around the abolition of the law, effectively paving the way for new femicides and waves of domestic violence.

However, women will not give up on their legal rights. They will keep fighting to live freely and without any fear.

Last week women in Turkey took it to the streets in more than 30 provinces to protest the government and the AKP supporters in the face of police brutality, threats and violence on social media. The AKP had to postpone its meeting on the withdrawal from the convention.

Women in Turkey will continue to defend and promote the Istanbul Convention.

We, as women from Turkey and Kurdistan who are currently living in Europe, call upon the women of the world to raise our sisters’ voice in Turkey.  We say “our languages ​​are different but our struggle is the same”.

We know that the Istanbul Convention is the fruit of our struggle against patriarchy all around the world, united and strong. Now, we need to stand shoulder to shoulder once again to stop Turkey from withdrawing, as we did when we made those 45 countries sign the convention.

The withdrawal of Turkey, Poland and Hungary would be a loss for all women in the world. That’s why, all our sisters and democratic institutions, organisations and individuals must come together and spread the message of women in Turkey who do not leave the streets until they win.