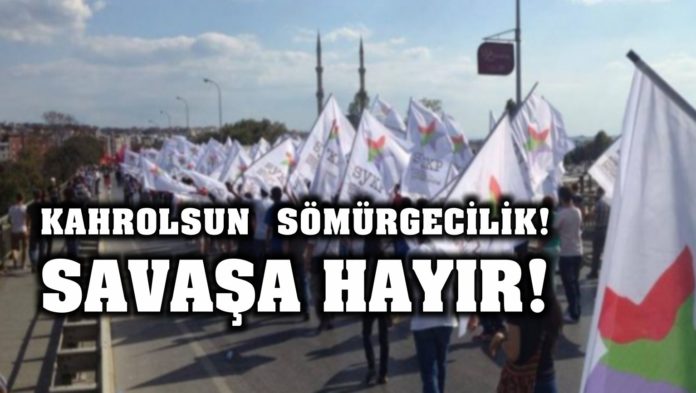 On August 21th 2013, more than 1000 people were slaughtered by a chemical attack in rural Damascus… This slaughter, of which the USA and her allies have held Syrian government responsible, is a notorious ploy to legitimize an imperialist intervention against Syria The Syrian government requested a United Nations convoy inspect the events and stated that they would provide all the support necessary to clear up the event. The threat of military intervention by the USA, without a clear report from the UN inspection team, is unacceptable.

Attempts of invasion of imperialist powers against Syria have been continuing since March of 2011. During the course of the conflict more than 100.000 people lost their lives. Furthermore, hundreds of thousands have become disabled and lost their homes. The war attempt -which not only ended lives but crushed the spirit of its people- wants to be finalized with an invasion.

While both sides of the conflict were expected to come together and find a solution during Geneva II Peace Conference, instead the start of warmongering provocations is a plan to turn Middle East into a bloodbath. Imperial Powers act as if they care about human rights and democracy when it comes to chemical warfare, but yet they leave their nuclear waste materials to 3rd World countries uncontrollably and cause harm as much as chemical weapons. We know very well that the nature and one of its important parts, human life, has no value for the imperialist powers.

AKP Government is an important part of this intervention

On 25 August 2013, with the participation of the USA, United Kingdom, France, Italy, Germany, Egypt, Saudi Arabia, Qatar, Jordan, United Arab Emirates and Turkey, a conference  was held in Istanbul and military bases to hit in Syria was decided. We condemn those countries who interfere with the internal affairs of another country in favor of their own interests.

The policies of the AKP government, who insists on war since the beginning of the conflict in Syria, threatens both the people of the region and us. We, as the people of Turkey, state that we are against the war policies of AKP. No nation, including Turkey, has the right to be aggressive towards another country, and support the mobs who commit humanitarian crimes…

Our Appeal: This war can be stopped by the people of the invading nations…

The cost of this war will be heavy for the entire region and it can be stopped by the united power of the people… Our appeal to the people of Turkey, USA, United Kingdom, France, Italy, Germany, Egypt, Israel, Saudi Arabia, Qatar and UAE:

Those who die are our brothers who have no benefit from this war. This is the money and power struggle of imperialism. We shall unite in a common front against imperialist invasion against Syria. Only a strong peace struggle we raise can stop this war. Let’s not forget that in Vietnam, the anti-war attitude of its own people made the USA step back.

No Imperialist Invasion in Syria! Long live the brotherhood of the peoples!