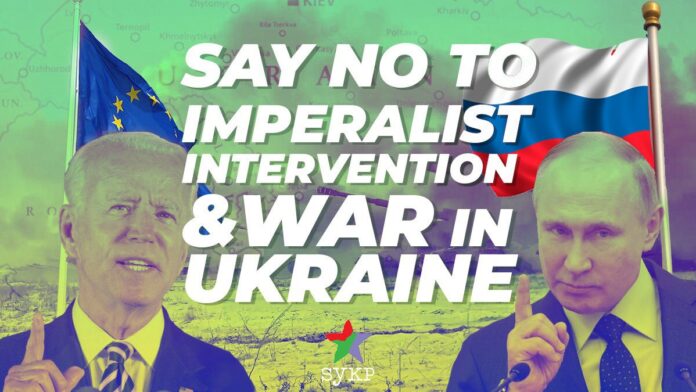 What is happening in Ukraine today is mainly a result of the developments that started with the independence of the Soviet republics after the official collapse of the Soviet Union in 1991.

While the Russian Federation, the successor of the Soviet Union, was rapidly becoming capitalist, barriers were placed in front of its re-emergence as a global power: new independent states were born in Eastern Europe and they were quickly integrated into Western capitalism.

NATO, which was established against the socialist countries that emerged after WWII and the “danger of communism”, continued its existence after 1991, even though the Warsaw Pact against it disintegrated and the so-called “communism threat” had disappeared. Moreover, it encircled Russia from the West, encompassing all of the Eastern European countries and the 3 Baltic states.

After the Orange Revolution in 2004, a bloody coup took place in 2014 with the support of the USA and European countries in Ukraine, which was then ruled by pro-Russian parties. After the coup, in which Ukrainian fascist-nationalists played an important role, pressure and violence against the Russians, who make up about 20 percent of the country’s population, increased, and the Russian language was banned. Thereupon, armed uprisings took place in the eastern part of the country, in Donetsk and Lugansk oblasts, where the Russian population is predominant, and “people’s republics” were established. In the same year, Russia occupied the autonomous republic of Crimea, dominating the Sea of ​​Azov, which hosts the Russian Navy in the Black Sea, and annexed it after the “referendum”.

With the accelerating effect of these events, the Ukrainian ruling class, who wanted to take shelter in the protective shield of the Atlantic Alliance against Russia, approached the West more and more, while the USA and Western capitalist countries provoked and armed Ukraine in order to block Russia’s path. Turkey also joined the band by providing UAVs to Kyiv.

Russia, which had completed the capitalisation process with severe social traumas during the presidency of Boris Yeltsin, gained self-confidence and became a global power and an imperial country under the rule of Vladimir Putin. Russia, which made an alliance with China, the recent archenemy of the USA, turned to re-establish its dominance in the countries that were colonies of the Tsarist period and parts of the former Soviet Union and entered the struggle for hegemony with Washington.

Ukraine has become the site of geopolitical conflicts of interest between the Western block and China and the Russian Federation. What happened and will happen in Ukraine can only be made sense within this equation.

The Right Of Secession

As SYKP, firstly, we condemn the attacks of NATO/Western-backed fascists against the Russian ethnic population living in Ukraine, the policies and practices of the Ukrainian state that suppress the Russian identity and ban the Russian language. As it is clearly written in our program, besides nations and nationalities, it defends the right of self-determination of any political unit (autonomous region, republic, etc.) and their right to secede from the states to which they are politically affiliated.

However, as a result of the deportation, genocide, resettlement policies of the states, and the population shifts partially due to economic-political-religious reasons throughout history, nations, nationalities, ethnic groups have been intertwined, the demographic structures of the historical settlements of these communities have changed. It is not possible to ignore the fact that it creates an extremely complex population structure with the interaction of political-economic-cultural-religious factors.

Indeed, Putin’s Russia uses the “right to self-determination” in Ukraine as a means of shaping the country in accordance with its own interests. However, the same Russia was able to suppress this demand violently by carrying out massacres in Chechnya. Again, same Russia continues to systematically prune the powers of the autonomous regions and republics within the federation in favour of the central ruling class.

In addition, Putin, while appearing to defend the rights of Russians living in Ukraine, openly rejected the existence and historical rights of the Ukrainian nation, even the legitimacy of the Ukrainian state, in his speech on Ukraine on February 21, in which he exposed his hatred of communism and his support for Great Russian Chauvinism. By declaring the geography of Ukraine as a “historical area of ​​interest”, he created an ideological basis for possible occupation movements. This is no different than Turkey claiming the territories of the countries in the Middle East and the Balkans; It is no different from the fact that Ankara occupying northern Cyprus – and especially no different from declaring Kurdistan as the “Turkish homeland”.

Ukraine War Is An Offensive Rather Than A Defensive War

All indications clearly show that Russia is an expansionist state aiming to become a global hegemonic power, acting in the interests of the capitalist class, aiming to revive the Russian Empire, and the war it started in Ukraine today is not a defensive war, it is aimed at expanding its sphere of influence.

As SYKP, while defending the right of self-determination of the peoples, brotherhood and peace among peoples without hesitation, we declare that we strongly condemn the imperialist and hegemonic wars and the warring parties.

We also call out to those who rule Turkey: Stop the arms sales to Ukraine. Stop provoking and arming the Ukrainian government together with NATO! Turkey must remain committed to the Montreux Convention and strictly abide by the provisions of the Convention, which restricts NATO warships from reaching the Black Sea. Considering the economic destruction that the war will create for the Turkish workers and oppressed, it should remain neutral in this war.

NATO and military alliances must be dissolved!

No to hegemony wars, no to the occupation!