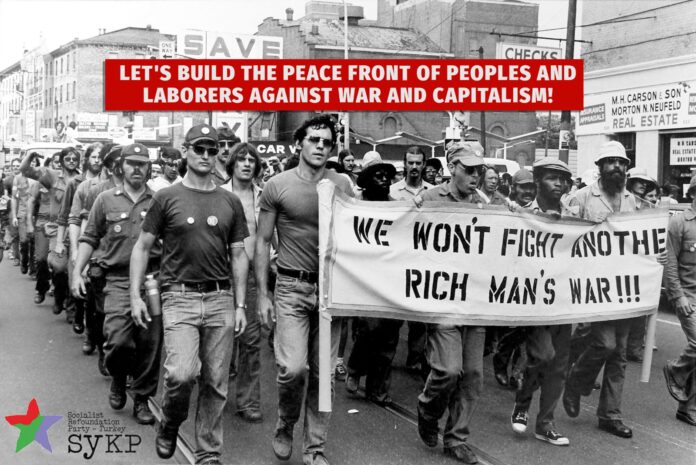 Central Executive Committee of SYKP (Socialist Refoundatıon Party) made a statement on September 1st World Peace Day. In the statement, it was emphasized that peace and disarmament is a vital demand for the peoples and workers of the world; It was reminded that it is our urgent duty to strengthen the struggle against war, militarism and capitalism and to establish the Peace Front.

The full statement is as follows:

Wars, conflicts and civil wars are still raging all over the world, from Africa to Latin America, from Asia to the Middle East. In the Middle East and North Africa, the foreign-intervened civil wars in Yemen and Libya, the conflicts between Ethiopia and Eritrea, Morocco and Western Sahara are killing, maiming and displacing millions of people and draining the human and material resources of those countries. The war in Ukraine, just north of the Black Sea, which started with Russia’s aggression, has already been lasting for six months.

The great crisis of world capitalism, which started in 2008 in the field of finance and spread to all areas of the economy, is severely affecting the working people, the oppressed and the poor peoples. The unemployment rates and poverty are increasing worldwide, while hundreds of millions of people are fleeing their habitats and countries for survival reasons due to wars, big corporations continue to add to their profits.

Even as the world economy contracted by 4.4 percent last year, military spending by governments increased by 2.6 percent to a total of $2.1 trillion. While so much money is being spent on armaments and wars, 811 million people in the world are currently starving and 25 thousand people a day and 9 million people a year die from hunger-related causes.

These data alone show how the private property and profit-oriented character of the world capitalist system contradicts the interests of humanity, and how peace and disarmament is a vital demand for the peoples and workers of the world.

While billions of people struggle with hunger and poverty and are displaced from their homes, a handful of capitalists and their states use the wealth and power they hold in their hands not to alleviate human suffering and distress, but to increase exploitation and expand their capital. However, even a small fraction of the trillions of dollars spent on war and armaments could eliminate the danger of world hunger and significantly reduce poverty.

This fact alone shows that capitalism is the enemy of all humanity and that this system must be destroyed for the salvation of humanity.

But capitalism’s relationship with war is also structural. One of the most important areas of capital accumulation is the arms/war industry. The companies investing in this industry are the main instigators of wars, conflicts and international tensions in all capitalist countries. War and tension must break out so that the weapons they produce can be sold more, new orders can be received, newly produced weapons can be tested on masses of people and marketing opportunities for new sales can increase!

Another important “benefit” that capitalism derives from wars is that the destruction wrought by wars is used to destroy obsolete means of production (machines, means of transport, etc.), whose profit-making margin has decreased but which nevertheless continue to take part in production, and to increase the rate of profitability by introducing new means of production.

For these reasons capitalism needs wars. That is why the struggle for peace and disarmament is a very important aspect of the struggle against capitalism.

After the collapse of the Soviet Union in the early 1990s, the United States has gradually lost its position as the sole hegemonic power in the world. The US is trying to maintain its position with its military, economic and political power, yet it continues to bleed.

Countries such as Russia, India, China, and others are rejecting US leadership and claiming that a multipolar world has been created. Tensions between these global powers are reflected in wars and armed conflicts around the world. Many of these conflicts take the form of “proxy wars”.

NATO, the war organisation of Western imperialism led by the USA, was established after the Second World War to “stop communist expansion”. However, despite the collapse of the real socialist system, particularly the Soviet Union, NATO has not only not disbanded itself, but has expanded its “area of responsibility” beyond the borders of Europe, towards the whole world. In the 10-year strategy document adopted at the recent Madrid summit, China was defined as a “threat actor” and Russia as the “most important and direct threat”. But the wording of the document makes it clear that China is the strategic target.

For 200 years, the Western-centred imperialist-capitalist system has sucked the blood of the entire world and given the peoples of the world nothing but exploitation, colonialism, hunger and misery. However, China and Russia, which have been integrated into world capitalism later on, now in alliance, are rapidly arming themselves, expanding their economic and political sphere of influence, becoming increasingly powerful in the race for global domination and threatening the hegemonic position of the US.

On the other hand, these struggles for hegemony allow regional powers such as Turkey, Iran and Brazil to take advantage of the conflicts between the global powers, expand their room for manoeuvre and pursue expansionist and aggressive policies in their own regions.

Expansionist Foreign Policy is a Common Orientation of the Capital Class

The AKP’s policy of “Neo-Ottomanism” is based on this very ground. However, it should not be forgotten that this foreign policy orientation is not only the “fantasy” of Tayyip Erdoğan and the AKP elites, but also a manifestation of the economic, political and military expansionist tendency of the Turkish monopoly bourgeoisie. Continuous attacks on the Kurdish regions of Rojava and Bashur, invasions, bases established; direct involvement in the Syrian war; taking part in the war in Libya with military forces, establishing military bases in Qatar and Somalia, etc. are also a result of this orientation of Turkish capital.

However, war industrialists, the construction sector and exporters benefit the most from this militarist and aggressive foreign policy, and most of these are AKP-funded capital groups. Turkey’s capital class is flourishing by feeding on the blood and tears of the peoples of the region.

Destroying the Kurdish people’s struggle for freedom is always foremost among the goals that shape the domestic and foreign policies of the Turkish ruling class and state. The policy of denial and annihilation of the existence of the Kurds has been implemented in the most brutal way, but the struggle of the people has frustrated this attack. The current goal is to destroy the organised will and political structures of the people. This is the main orientation both within the borders of Turkey and in Rojava and Bashur.

This orientation keeps the Turkish state in a constant “state of war”, poisons the society with chauvinism and militarism, wastes the country’s resources for the sake of illusory dreams, and leads to a decline in the welfare level of the people, impoverishment and unemployment.

While the Kurdish people are reaching out for peace, for equality and brotherhood of peoples, for democracy, the political power is raining bullets on them, imprisoning them, occupying their lands and trying to eliminate their political structures. Rojava and Bashur regions are the target of constant military operations, occupations and efforts to create new base points.

Let’s Raise the Struggle for Peace

The struggle for peace is an integral part of the struggle against capitalism, which feeds on war and is the source of war. That is why we must raise the demand for peace in every field, inside and outside.

The uninterrupted, unlawful war waged by the state against the Kurdish people’s struggle for freedom is hitting the Kurdish people the most, but the material and moral costs of the war are also being borne by all the peoples of Turkey and the region. Fighting against this dirty war is imperative not only to raise the solidarity that the Kurdish people deserve to the end, but also to defend our bread, our jobs, our rights and freedoms.

Peace is the common demand of all workers, all peoples, women, youth, LGBTI+ and all of the oppressed.

It is the urgent and vital duty of all democratic, patriotic, revolutionary and socialist forces to create a broad Peace Front against war, militarism and capitalism, in which peoples, workers, youth, women, LGBTI+s and all oppressed people will participate.